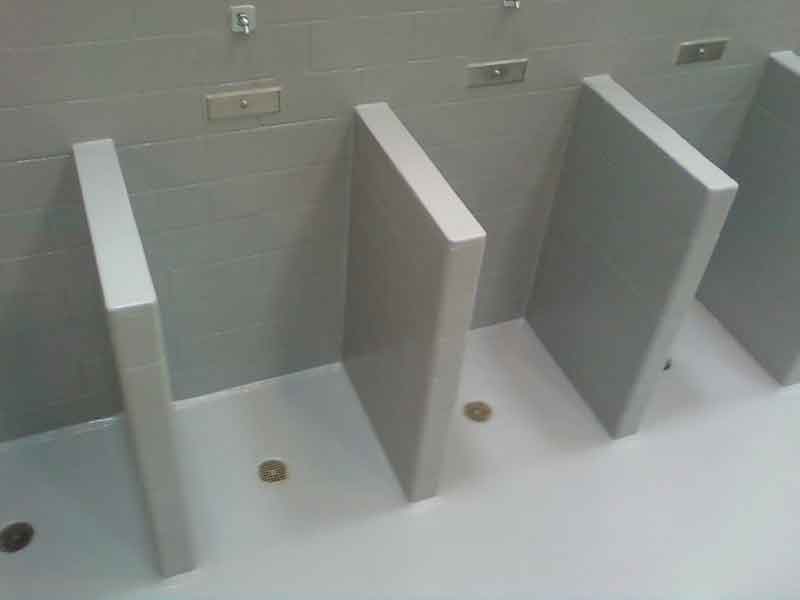 Nothing attracts bacteria like the shower. Crevices and cracks in the flooring, ceiling or walls can be the perfect place for mold and spores to accumulate. These fungus and bacteria can lead to health problems as well as eat away at the very material they live in. The result is a damaged shower that may costs thousands of dollars to replace and can be virtually impossible to clean.

Because corrections showers see so much traffic, they are at an even higher risk of severe damage over time. That’s why it is vital that you know how to choose the right wall, ceiling and floor coatings for your prison showers. We’ve put together a few guidelines so that you make a wise decision.

The nooks and crannies that are prevalent in concrete are often not covered up very well by simple epoxy paint or urethane sealant. Corners are also natural weak spots for these kinds of prison floor sealants or paints, as they often don’t adhere as well as they should. That allows for bacteria to get in underneath, causing erosion over time. A seamless system, like the Seamless 5130 System, eliminates these corners completely. It makes for an easy-to-clean shower that provide no hidden spaces for bacteria to grow in.

2. Find a corrections shower flooring that is non-slip.

One of the greatest dangers in a jail shower is from slippage. When you are considering installing a prison shower, you should choose one that has the option for a non-slip coating to avoid unnecessary injuries. These are often offered as an add-on to most seamless corrections shower systems.

3. Choose a jail shower flooring system that is antimicrobial.

In most prison shower flooring systems, you can choose to add an antimicrobial element before the flooring is installed. This is very helpful in eliminating toxic bacteria that might otherwise attempt to burrow into the floor, wall or ceiling coatings. Often, this addition is not very expensive, and can contribute to a longer-lasting prison shower.

4. Pick a corrections shower floor that is attractive.

Although aesthetics are often not the highest priority when choosing a jail shower floor, a beautiful floor has been shown to contribute to a more relaxing environment. In prison shower areas where inmates may feel vulnerable, this additional aesthetic element may help alleviate tension that could lead to violence. While jail shower flooring will not overtly change behavior, it can be combined with other aesthetic elements to create a very low-stress environment that is beneficial for mental health and stability.

“Our new floor definitely has the “wow factor” I was looking for. We get numerous comments every day – from clients, the construction crew, and other people in our field. They are all amazed by the look of the flooring. We appreciate their on-time and efficient application and look forward to years of wear with our beautiful floor.”

“For the fourteen years I have been involved in the boarding industry, I have been looking for a high-quality and durable flooring system. Your company provided us with that flooring system, and an added benefit of excellent customer service!”

“I have been very happy with the products and services that your company has provided. Your team installed your seamless floor and protective coating systems throughout our entire clinic, grooming and kennel areas. I am very happy with the appearance, durability and low-maintenance associated with your products.”

“It looks so good it’s almost too nice to be a kennel floor! The kennels look excellent! The crew also did a great job fitting in our schedule!”

“Primecoat was the only acceptable alternative to stainless steel in the inmate showers and it was backed by a 10 year warranty.”